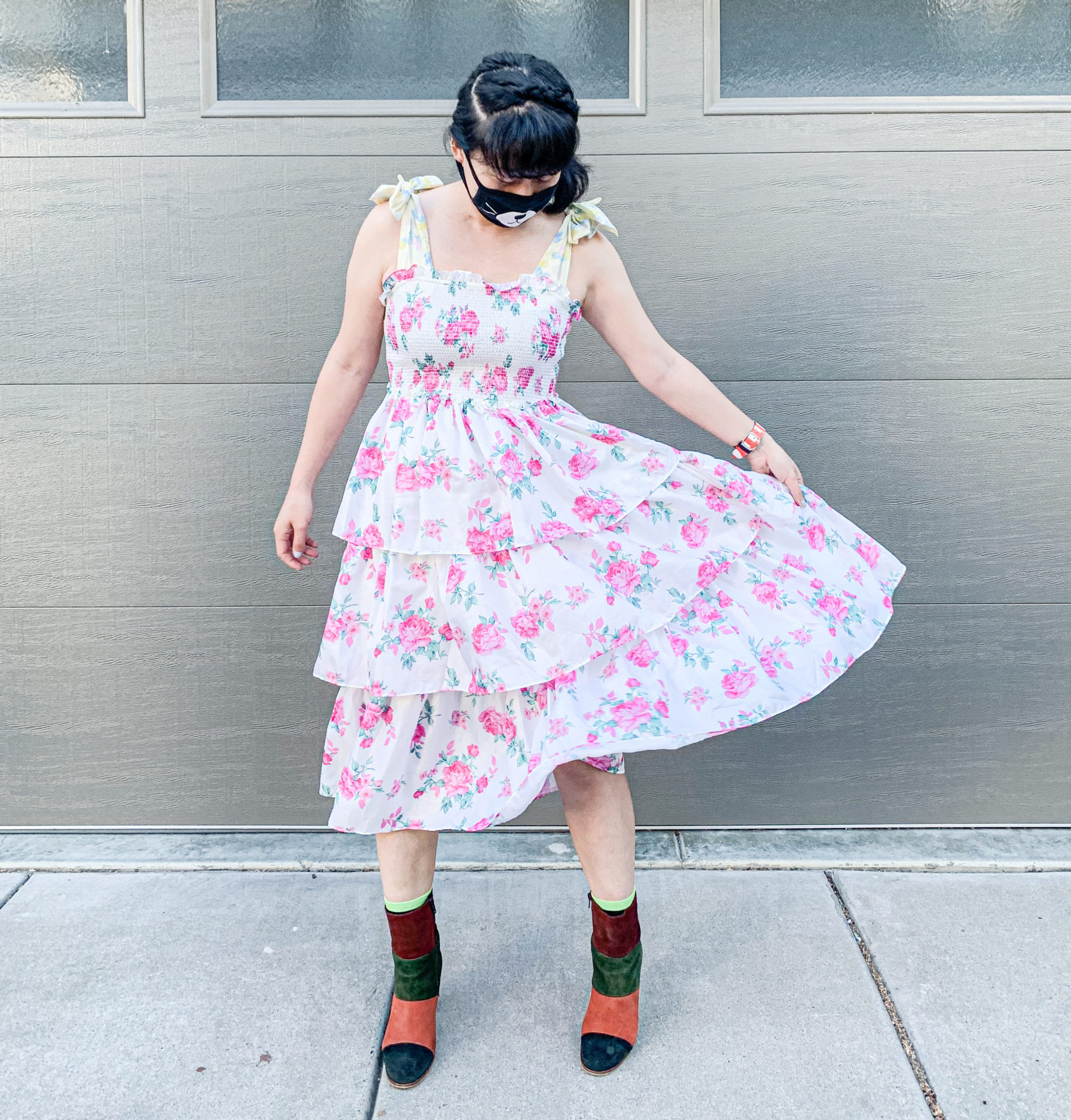 As an early bday present, my BF bought me this dress at Target. They were doing a collaboration with LoveShackFancy, which makes these beautifully tiered boho dresses and being the shopaholic that I am, I said I had to have something from this collab.

I settled on two dresses and this was one of them. The construction of these layers really sold it for me. The only thing that I wasn’t entirely sold on was the spaghetti straps. I have never been a big fan of them, so I thought to myself on the ride home if there was something I could do about it.

Well, what could I use to replace the straps with that wouldn’t necessarily compromise the style of the dress? The answer was the yellow belt.

First, I took scissors and cut off the two thin straps. A seam ripper would have unraveled more of the dress considering the chest area was entirely ruched.

Then I divided the belt into 4 even sections. A whipstitch was used to prevent the frayed areas (after being cut) from being exposed. Then the hand-sewing commenced.

Luckily enough, the belt was long enough that I could create two straps that were adjustable!! The great thing about using the belt to create straps is the new straps are also much thicker in width. I don’t enjoy having too much of my shoulders exposed (sunburns, am I right).

You know that new-dress-I-have-to-wear-it-immediately feeling? Yeah, I took it out for a spin. I paired it with my Musse and Cloud boots (from Poshmark) , which in hindsight, may have not been the best color combination with this dress. They were more of a fall color palette and this dress was more vibrant and summery. Strangely, one color that worked was the lime green sock stripe (peeking out from the booties), which matched surprisingly well to the straps!

The more I look at it, I felt that the yellow floral belt would have been too much in addition to these ruffle layers. This way, you can keep the focus on the dress. That being said, I wouldn’t be opposed to slapping a solid colored belt on this dress either.

This was definitely a small and simple DIY that you can easily do with almost any spaghetti strap dress and scraps of old fabric (even better if the dress comes with a fabric belt).

I wanted to end this blog post by talking about two videos that I watched recently that were really insightful. They were both videos made by Franchesca Ramsey.

The first one being How To Be An Ally, which equated being an ally as someone who wants to build a house but doesn’t know how to do it. She also elaborated on what privilege means and the importance of listening first. And finally, she emphasizes that ally is a verb because you have to do the work!

Before you fight for the rights of others, you have to figure out what rights you have and what others don’t.

The second one is How To Apologize. If you’re apologizing to make yourself feel better, then you’ve missed the point. Of course, it is not a surprise that an apology doesn’t include the phrase “I’m sorry if you were offended!” (I’ve said that in my lifetime, I am pretty certain and will be removing that phrase). Here’s what she considers the two main components of a true apology:

The common theme I see with many of these brands who are trying to apologize for their shady tactics is that they don’t take responsibility for what they did and they barely offer a true commitment to change their policies. For example, see Anthropologie’s “apology” when DietPrada published an account of them using the word “Nick” to describe black shoppers.

Franchesca’s videos are not new (they are from a few years ago), but yet the message remains the same to this day. I hope this has been informative.

3 thoughts on “Tiers to the weekend!”

Nitrochique is a blog run by a scientist slash artist who wants to talk about.. well, anything that’s on her mind. Mostly fashion focused.